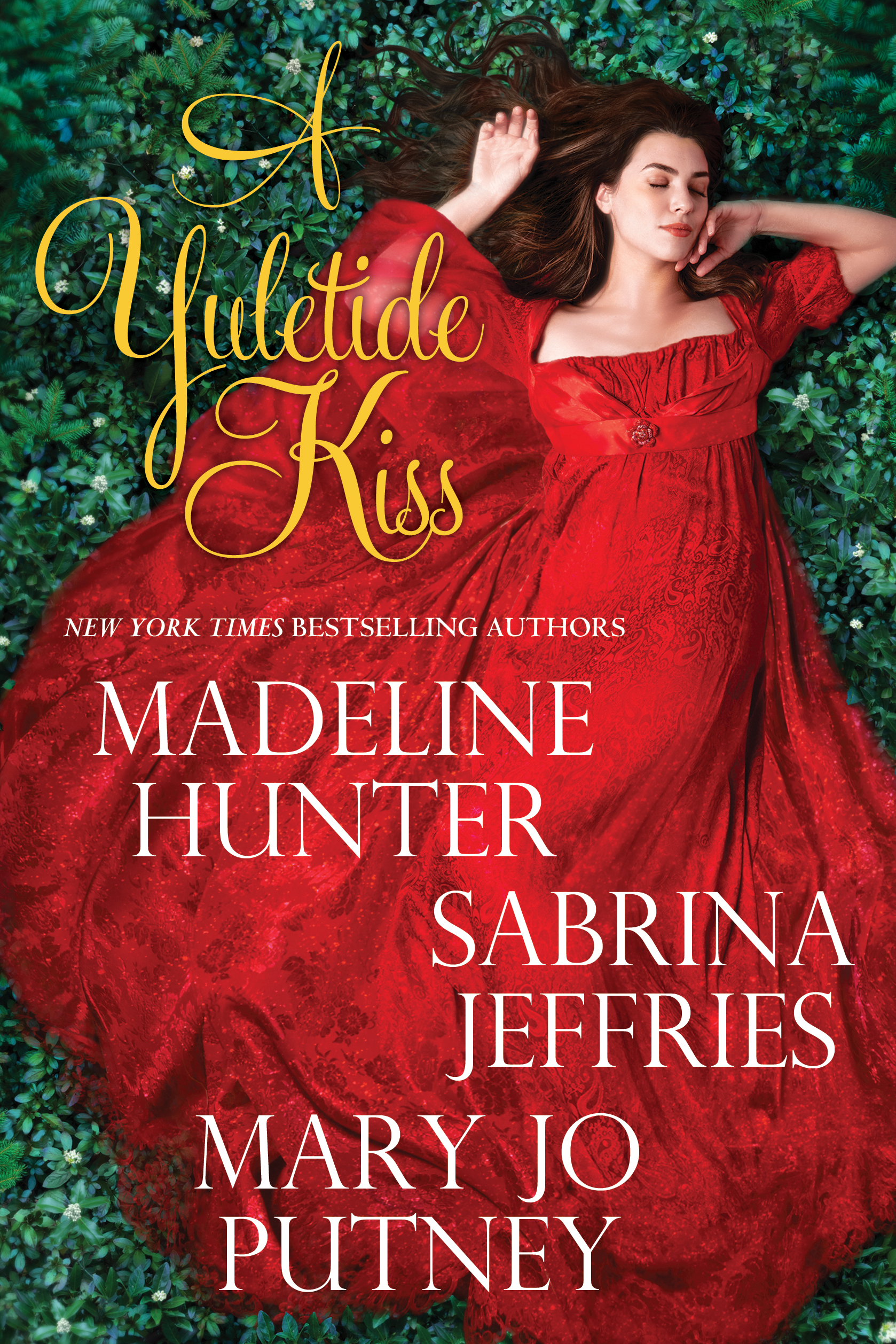 WHEN WE FINALLY KISS GOOD-NIGHT by Sabrina Jeffries
When Flora Younger first met Konrad Juncker, she thought she’d found her match, only to have her hopes dashed. Konrad is now a famous playwright whose plays Flora has secretly panned in reviews. But a chance meeting in a secluded inn may help them rewrite this star-crossed romance…

“Insightful, engaging, and possessing just the right dash of holiday spirit, this a perfect gift for historical romance fans.” —Booklist

Flora Younger watched the innkeeper go, questions swirling through her head. How many people had asked for shelter here, anyway?

She hoped there were enough to keep her from stumbling over Konrad Juncker everywhere she stepped. Judging from the sudden gleam in his eye, he seemed to have a good rapport with Mrs. Waverly already.

An unwanted jealousy stabbed her. Of course he did. He regularly enticed women of all ages with that crooked smile of his.

“Shall we, ladies?” he said and swept his hand to indicate a closed door behind him.

“Flora, why don’t you go on with Mr. Juncker and see whether our accommodations will suit,” Lady Whitmarsh said. “I have to … er … make sure Braxton is aware of our decision to stay and get him to carry up our luggage.”

Flora tried to read Lady Whitmarsh’s expression. Never before had her employer gone out of her way to inform their coachman of anything. Or, for that matter, had Flora examine their “accommodations.” It only reinforced Flora’s suspicion that Lady Whitmarsh was up to something.

Konrad watched the woman leave, then moved to open the door, waiting for her to go through before he gestured to the stairs. “Why do you let her treat you like a servant?”

“I am a servant, for all intents and purposes,” Flora shot back as she climbed the stairs ahead of him. “Anytime you do something for someone because you’re paid and not out of the goodness of your heart, you’re a servant. Besides, it’s better than being treated like a post-horse, to be used for a stretch and then abandoned.”

When Konrad swore under his breath, she took less pleasure in his reaction to her barb than she’d expected. But at least she’d made it clear where they stood now, instead of simply lapsing into silence and one-word answers as she had when they’d briefly encountered each other a month ago.

“In Bath,” he said, “I was constrained … I could not …” He muttered something she couldn’t make out. “Never mind. It hardly matters now.”

It mattered to her, but she wasn’t about to ask him to elaborate. He would give her some excuse, and she would want to believe him. In the end, it would simply lead to more unhappiness for her.

“What are you doing here, anyway?” she asked.

“The same thing you are, most likely. Hiding from the weather.”

“Hiding is certainly in your character,” Flora mumbled as they reached the top. It was warmer up here, so she pushed her hood off her head.

Then she wished she hadn’t when he moved to stand in front of her, his icy look chilling her again. “What did you say?”

A muscle flexed in his jaw. “If you must know, I’m on my way to the house party at Armitage Hall.”

“Armitage invited you, too?” Dread settled in her chest. After being trapped here with Konrad, she’d be trapped there as well.

“I do happen to be his half-brother’s closest friend, despite my lowly station.”

The sarcasm in his words stung a little. “Yes, so lowly that all of London knows your name. False modesty does not become you, sir.”

“Trust me, my modesty is more genuine than you know.”

“If you say so.” She started walking along the gallery, hardly noticing where she went. “But I wasn’t trying to insult you when I asked about my friends inviting you. After all, Thornstock doesn’t live at Armitage Hall. I assumed that Lady Whitmarsh and I were invited because of my friendship with Armitage’s new wife. I didn’t realize that Thornstock or the rest of the family might be there, too. That’s all I was remarking on.”

Belatedly, it occurred to her that Lady Whitmarsh most certainly could have engineered both invitations—one for Flora and one for Konrad. But why would the woman wish to match her with Konrad? Lady Whitmarsh didn’t even like him.

It made no sense. Perhaps Flora was reading too much into her employer’s behavior.

Konrad came up beside her, and her foolish heart started thumping. Why must he still do this to her after their years apart? It had made sense for her to react like a schoolgirl at nineteen, but she was a woman of the world now, the companion to a viscountess. He shouldn’t affect her like this anymore.

He dropped his voice to a murmur that hummed along her skin. “Perhaps we should call a truce.”

“The ice in your eyes whenever you look my way seems to imply otherwise.”

“What were you expecting—warmth? You disappeared from my life without a word to go become a famous playwright. You led me to believe—” She shook her head. “I am not discussing this with you. I have to ready her ladyship’s room … and mine.”

“Do you even know how to start a fire?”

Of course not. And he was obviously aware of that, judging from his smug look. Oh, how she hated it. “Do you?” she shot back.

“I do. And what I meant by ‘truce’ was we should put our past grievances aside for the sake of getting through these next few days in an understaffed inn.”

“Next few days!” Her stomach knotted up. “Do you think we’ll be forced to spend Christmas here?”

“Possibly. Why? The good part about being stuck so close to Sanforth is that the guests at the house party will also be unable to leave. So our plans to enjoy the season with our friends are merely postponed.”

“I hope you’re right. I was so looking forward to seeing the Christmas tree.”

“I beg your pardon?”

“Vanessa told me the family puts up something called a Christmas tree for their festivities. She hasn’t seen it, though, so she couldn’t describe it for me.”

“If it’s anything like the one my parents used to put up every year, it’s beautiful.” When she eyed him askance, he added, “It’s a German custom. My father was German, and all of Armitage’s siblings were raised in Germany. But every tree is different, so I can’t describe it in detail without seeing it.”

“Now you’re making me even more upset that I might miss it.”

Then it hit her that he’d mentioned his parents. She’d known nothing of them. She was about to ask some probing questions when he said, “Anyway, back to our truce … Will you agree to one?”

She looked him over, noting his bright blond hair, fashionable in its disarray,  and his finely tailored clothes, from his tailcoat of dark blue superfine wool to his chocolate-colored top boots. No one could deny he was attractive, but that appearance now came with a full measure of rakish charm.

He was no longer the man she’d thought he was, if he ever had been. He was famous now, and so posed no danger to her. She wasn’t about to take up with a man who had so many admirers that she’d have to fight them off, even if his speaking glances did hint at the secret embraces he might give her if they were alone.

A pity they could never be alone, no matter how much she was tempted.

Very wise, as long as she could reconcile herself to the man he was now, and finally set about forgetting the man she’d once known.

Other books in the Duke Dynasty Series