Wed Him Before You Bed Him 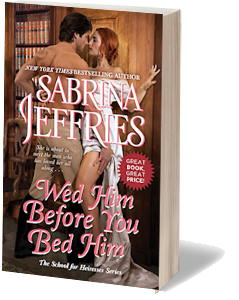 From The School for Heiresses

Wed Him Before You Bed Him

The Summer of the School for Heiresses closed with the series finale: Wed Him Before You Bed Him. The book arrived in bookstores June 23rd—and caused quite the sensation. Thanks to readers for making it #8 on the New York Times and #25 on the USA Today bestseller lists!

At eighteen, Charlotte Page made a life-altering mistake. She wronged a man in an impulsive act that she came to deeply regret, though it led her to her present life as Mrs. Charlotte Harris, owner of Mrs. Harris’s School for Young Ladies.

Unbeknownst to her, that man is now her anonymous benefactor, the mysterious “Cousin Michael.” His masquerade began as preparation for a devastating revenge, but soon became a labor of love. Now Charlotte desperately needs his help. Can he save her from disaster as his real self without revealing the ugly secret behind his charade? Or will the mistakes of both their pasts tear them apart forever?

Thanks to you wonderful readers, the book hit the following bestseller lists:

Bold Title Award for June 2009 from Examiner.com, as part of its Top Crazy Catchy Romance Titles competition for June 2009

“The last chapter in Jeffries’s “School for Heiresses” series includes all the sweet, sexy charm and lively action readers have come to expect, and true love triumphs over all obstacles, which include a murder investigation and all manner of nasty chaps. Bravo to Jeffries.” —Library Journal

“Jeffries has written the ideal conclusion to her fabulous School for Heiresses series, rewarding her fans by revealing a secret or two in the wondrous, tender and sexually charged love-and-laughter story of Charlotte Harris, the school’s founder. With lively dialogue, deep emotion and multi-faceted characters, Jeffries wins readers’ hearts and holds her fans’ admiration.” —Romantic Times

He certainly seemed impatient for Charlotte to be gone, given how he hurried her out of the ballroom and down the stairs. But when they reached the bottom of the staircase, she realized his impatience was not for that. Before they could head for the entrance or attract the notice of the footmen at the far end of the passage, he pulled her into the nearby library. Then closing the door, he hauled her into his arms.

“Not one word, Charlotte,” he murmured. “Not now. Just let me have this.”

Then he kissed her with such fierce intent that her toes curled in her slippers. Oh, heavens, what the man could do with his mouth. It was tender and bold all at once, and so needy it made her heart ache for him.

When at last he drew back, she dropped her reticule to grab his lapels and tug him down to her again, not ready to end their interlude.

That was all the encouragement he needed. With a guttural moan, he shoved her against the door, his mouth savaging hers, his tongue thrusting deep as his lean body slid against her in a motion that was unmistakably intimate. Already she felt the ridge of his flesh pressing insistently against her belly. His hands roamed up and down her sides, over her hips and up to her breasts.

But when he filled his hands with them, she pushed him back. “No,” she said softly. “Not here.”

A dark knowing flared in his face. Oh, Lord, she’d as much as said that elsewhere would be fine.

Unfortunately, that was true. She wanted him. She had always wanted him. And would it be so very bad to have an affair? She was a grown woman. She could do as she pleased. And so could he.

He bent his head to her cheek, dragging his open mouth along her jaw to her ear. “Then where?” he murmured. “When?”

She could hardly think with him still cupping her breasts. “We ought to wait until after—”

“Discreet, yes,” he breathed in agreement against her ear.

Her mind was swimming, her body alive to the feel of him. “I just know it cannot be here.”

“Right.” Yet he reached for her leg and pulled it up, pushing into her, mimicking the act he wanted to perform. “Not here.”

She must be mad, both to be considering this, and to be letting him touch her now. They could be discovered at any moment. “We have to stop.”

“Yes.” Still, he tried to take her mouth again.

This time she shoved him hard enough to make him fall back. His gaze burned into her like a brand, sparking a fever in her chest.

“Not here,” she said firmly. “Not tonight.” She had to escape him, to think about what she was doing. Before she fell into something she regretted. “I have to go. We can talk about this later.”

“Tomorrow.” His eyes glittered in the firelight. “We’ll discuss it tomorrow when I take you to see those properties.”

“The ones for the new school building? Remember? So you don’t have to deal with a race course next door?”

“Oh. Right.” She had completely forgotten about that. At the moment she could hardly think.

Still trying to catch her breath, she bent to retrieve her reticule, then remembered something else. “Didn’t you tell my personal footman that you would give me a list of those properties tonight so I could look it over?”

“Of course.” Delving inside his coat pocket, he drew out a folded sheet of paper, but when she seized it, he grabbed her by the wrist. “You must promise you won’t go tour them without me.”

“Because it’s dangerous for a woman to do that sort of thing alone. Some sellers are unscrupulous, and some of the vacant properties could have vagrants—”

With a scowl, he tightened his grip on her wrist. “I’m not giving you the list unless you promise.”

“Oh, very well. I promise.” As he released the list, she tucked it into her reticule and opened the door to peek out into the hall. Fortunately, the footmen were involved in a heated discussion, leaving the two of them free to slip out and head for the entrance as if they’d just descended the stairs.

While waiting for her carriage to be brought, they said very little, but she was painfully aware of his body beside hers, of its heat and strength, which could be hers whenever she wanted. The knowledge was as exhilarating as it was terrifying. Merciful heavens, when had she turned into such a wanton?

More in the School for Heiresses series